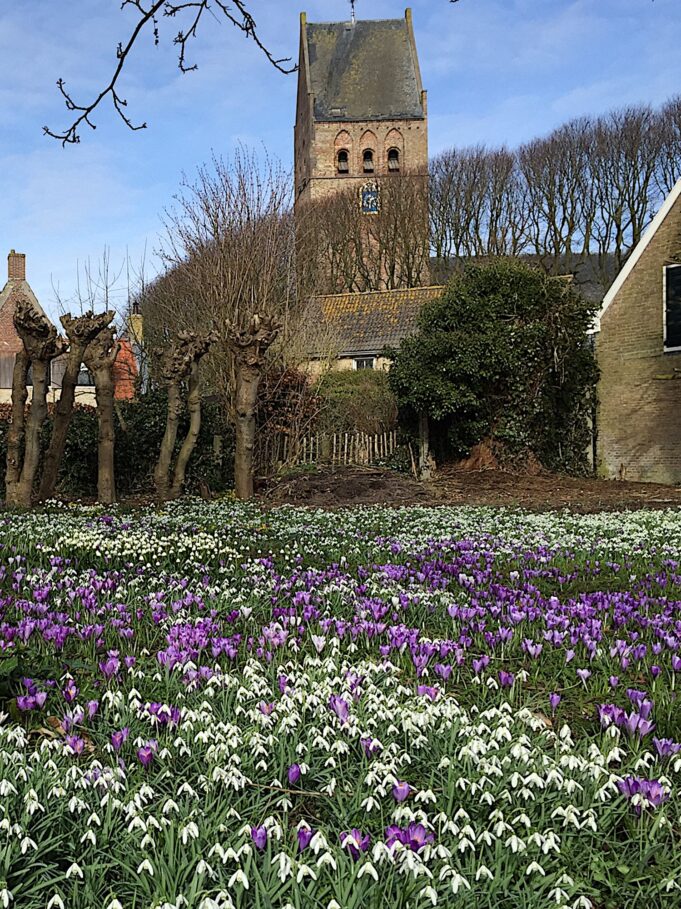 The ‘Doktershûs’ (Doctor’s house) in Stiens is close to the church. The house was build in 1838 and has a nineteenth century English landscape garden that was laid out by the garden architect Gerrit Vlaskamp (in 1863, 1868). After a long period of neglect, the garden has recently been refurbished by the current residents, is approximately 2900 m2 and has a rich Stinzenflora. The garden is regularly open during the Stinzenflora season. The garden has an impressive Caucasian wingnut (Pterocarya fraxinifolia) and from the garden there is a beautiful view of the church tower of Stiens and its surrounding Lime trees. The garden is sheltered and therefore the Snowdrops, Winter Aconites, Spring Snowflakes and Dutch crocuses are blooming early. A little later the Bulbous Corydalis and the Drooping Star-of-Bethlehem arrive, and a bit later the Wild tulip and Star-of-Bethlehem. As a companion, the bushes of the beautiful Salmonberry (Rubus spectabilis) with the pink flowers do well. Scattered in the field grow the Lords-and-Ladies and its Italian variety, the latter of which stand out well in autumn thanks to its orange berries.